Hoyt Wilhelm with the Jacksonville Tars 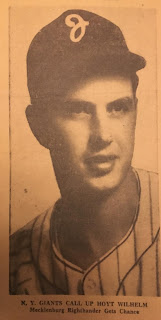 Photo credit: The Charlotte Observer
1948: Hoyt Wilhelm's time with the Jacksonville (FL) Tars (NY Giants Class A team, South Atlantic League) started out rough in 1948, as he posted an 0-0 record, 9 walks, and an 8.18 ERA in 11 innings during 6 games before being sent to the Knoxville (TN) Smokies (NY Giants Class B team, Tri-State League) where he flourished (see Knoxville Smokies page on Wilhelm).
1949: Wilhelm would redeem himself, however, in 1949, when he started and finished the season with the Jacksonville Tars, posting a 17-12 record (most wins on the team and sixth-best in the league) and a 2.66 ERA (best on the team and ninth-best in the league). At the plate Wilhelm hit .244 and had 2 doubles. 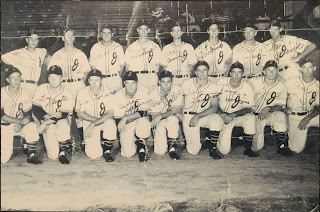 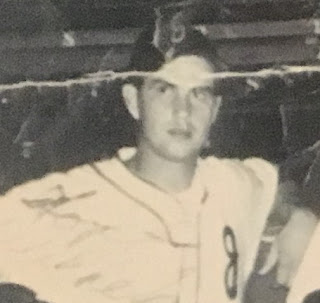 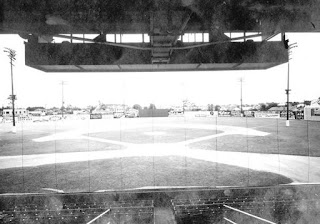 Photo: Durkee Field, Jacksonville, Florida (1939)
The Jacksonville Tars played at Durkee Field, which was rebuilt in 1934 and hosted a minor league team until 1954 when a new stadium was built. Durkee Field was later renamed J.P. Small Ballpark and is now listed on the National Register of Historic Places as Joseph E. Durkee Athletic Field.
Posted by Brett Honeycutt at 8:33 PM

Brett Honeycutt
I spent 25 years in journalism - first as a free-lance writer for 7 years, then on staff at a daily newspaper for 10 years, and then I managed a national magazine for 8 1/2 years. I am back to free-lancing, working on various projects (including directing a high school hall of fame), while also coaching track and cross country and putting on high school cross country and track meets (I know, baseball and track - what an odd combination). *** Check out my Twitter "Hoyt Wilhelm Fan Page" at: https://twitter.com/wilhelm_hoyt